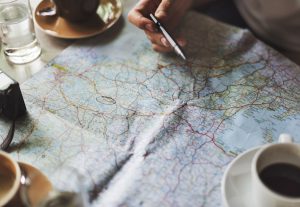 Directional Clarity looks at the ability to identify a credible destination and clearly communicate to others how to get there. A good leader needs directional clarity. In the day-to-day business of life and leadership, it’s incredibly easy to lose sight of where you’re going. Strong leaders keep sight of their long-term direction and communicate it effectively to others.

If God has not modeled directional clarity, no one has. This competency is the ultimate visioncasting skill. There is somewhere to go. We may not be able to see it yet, but there is a promised land and together we will get there. It may take a long time, it may be difficult, but we will overcome adversity and we will get there.

We see long-range vision throughout scripture: Imagine Moses looking out over the promised land from mount Pisgah. This competency, more than any other, is about living by faith. It’s about seeing what God has called us to do and doing it—even when there is a long road to be traveled:

By faith Abraham, when called to go to a place he would later receive as his inheritance, obeyed and went, even though he did not know where he was going. By faith he made his home in the promised land like a stranger in a foreign country; he lived in tents, as did Isaac and Jacob, who were heirs with him of the same promise. For he was looking forward to the city with foundations, whose architect and builder is God. And by faith even Sarah, who was past childbearing age, was enabled to bear children because she considered him faithful who had made the promise. And so from this one man, and he as good as dead, came descendants as numerous as the stars in the sky and as countless as the sand on the seashore. (Hebrews 11:8-12)

God casts the ultimate vision, and he asks us to live into that1 vision. We encourage each other to follow that vision as we walk the path of faith together—and leaders need to serve as keepers of the vision, always leading others toward it.

During this series of blog entries, we’re walking through the 8 characteristics highlighted in the Leadership Effectiveness Profile. These characteristics were found through observation and research in response to the question, “What makes an effective leader?”