When most people think about coaching, they think about one-on-one conversations or one-on-one relationships. Although that’s how it’s most commonly done, it’s far from the only way coaching can be effective. In fact, bringing others who are similarly invested together into coaching groups can provide great levels of support and perspective. In this way, people can learn from each other as well as from you and from listening to God for themselves. 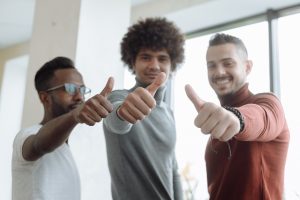 Bringing people who are similarly invested together into coaching groups can provide great levels of support and perspective. Click To Tweet

I ran across this concept of group coaching almost accidentally. At the time I was working with church planters and was trying to find a way for them to provide relational and prayer support for one another. Keeping the groups relatively small so everyone would have enough airtime to talk and engage, I found that the groups worked quite well. In addition to relational support, the planters frequently found themselves sharing best practices, bouncing ideas off one another, and troubleshooting specific challenges.

A coaching cluster is a small cluster of individuals, all with similar goals, and one coach facilitating the process. I’ve found that cluster coaching works best with a 1:3 ratio: one coach to three participants. It is important that all three participants in a coaching triad have a similar enough goal.

Coaching approach to working with teams

In team coaching, each member of the coaching group (aside from the coach) is a member of the same team and is working toward the same goal—let’s say it is planting a church. There is just one goal, but each team member is playing a different role and is bringing different contributions to the process.

The first step to learning how to do something is to see it being done, ideally as a participant. Why not create and facilitate a group geared toward developing new group leaders? By modeling—and then debriefing—an experience of gathering for a meal, sharing time, scripture reading, and prayer, we can teach others how to lead a group quite effectively.

The first step to learning how to do something is to see it being done, ideally as a participant. Click To Tweet

Coaching approach to working with boards

What group situations are you already a part of? How might you bring your coaching skills to bear on those situations? What might result?

Coaching 101– Coaching 101 will help you discover the power of coaching in your life both as a coach and as someone being coached.
Coaching 101 Handbook- This handbook is packed full of practical ways you can improve your skills in coaching those God has brought your way. You will gain a deeper appreciation of the coaching process and ‘coming alongside’ to help others as you understand the model outlined in these pages.
360 Coaching Assessment- Every coach should occasionally step back and assess their coaching skills. The 360-Degree Online Coach Assessment—named for its ability to provide feedback from the range of perspectives—is a research-based assessment tool built around nine core coaching competencies. It’s an effective way to get quick, accurate feedback on a person’s current level of coaching skills.
Photo by Thirdman from Pexels
<< Using coaching skills to develop leaders When anger becomes unhealthy >>