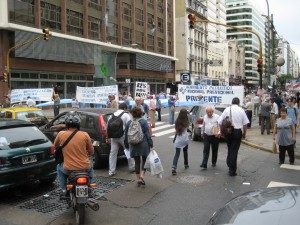 The destination was incredibly clear: the international airport across the city. The destination never changed. But the pathways of seeking to get there varied wildly. Our driver did a fancy left turn and went through some construction sites. It worked for a while and we made a bit of progress, but then we were back in a traffic logjam. That’s how we got even one mile from the hotel in 50 minutes.

We could see the highway from where we were now. I asked our driver in my barely passable Spanish, “Is the highway okay?”  “No. It’s closed.”  He turned left and starting going through back roads and alleys, through bad parts of town that tourists normally don’t see. He went this way and that until Janet and I didn’t even know what direction we were going. But the destination was still the airport. It was stop and go and we had to get all the way across town without the benefit of the highway. At one point it looked like we were going the right direction, then fires and picket lines blocked off our road. The distribution district was open though, so we went winding through the warehouses, then through a customs point.

Finally we found an open highway that was ten minutes from the airport. We got there late, but just in time to walk onto to the plane. During the ride it was never clear if we’d make it or not, but it was clear that this driver was going to try everything possible to get us there. When one thing didn’t work, he’d try something else. That’s the kind of strategic flexibility we need as missional leaders. The destination never changes, but the route takes some interesting turns.