Learning to trust your coach and your team 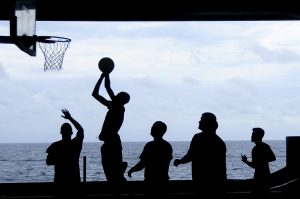 Michael Jordan is arguably the best basketball player who has ever played the game. All over the world people have heard of him. In rural China “Jordan rules” can be seen written on basketball backboards. Michael Jordan was a star, the best player on his team– on any team. He could shoot three-pointers and do long slam dunks. Athletic shoes were named after him. He was a leader admired across the world. For the first six years of his professional career, he won scoring titles, defensive player of the year, and many other awards. Yet during those same first six years, he never won any championships. The team didn’t get far. Michael was a star, but not a champion.

At that point, Phil Jackson became the coach for the Chicago Bulls. Phil taught a system called the triangle offense, which requires trusting your team. Now Phil had played pro ball, but he didn’t have the innate skill Jordan had. He didn’t know basketball as well and he couldn’t play nearly as well. But Phil had a way with the team, and he had a framework that allowed the team to work together within a structure: the triangle offense.

People called Phil the Zen master. He was known for bringing non-traditional methods into his coaching, and he aimed for a holistic experience with his players. He said to Michael, “You’re going to have to trust in me, and you’re going to have to trust in your team. You’ve been trying to do it on your own up until now.” Jordan bought into it, “Okay, I’m going to trust you and I’m going to try it. I’ll pass the ball to someone like Scotty Pippen, who isn’t as good as me.”

The team took a turn. They began winning. They won six championships in the early 90’s. They became a dynasty. Once they finally started functioning as a team, once Michael Jordan put his trust in a coach, the Bulls were able to make history. They accomplished all they wanted and more. Jordan was a hero as the Bulls went on to win six championships.

Yet Michael never won any championships until he got the right coach– Phil Jackson– and until Phil convinced him to trust his team. He was trying to do it all on his own before.

It doesn’t matter how good you are– you can’t do it on your own. Many pastors and denominational leaders don’t think they need coaching. But the fact of the matter is that you can be the best, you can be the Michael Jordan of ministry, but you won’t become a champion until you get a coach and until you learn to develop and trust your team. You might have an MDiv or a DMin. You might know more than many of your coaches. But if you want to be a champion, you need to get a coach and you need to trust and develop a team.