Leading from the pulpit 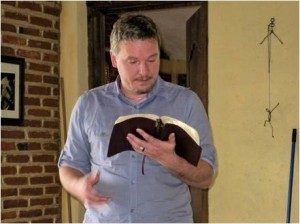 Most pastors don’t realize the power of their sermon and to what a great extent their sermon can provide leadership.

Carl George once told me, “Tell me the stories you’ve used in your sermons in the last six months and I will tell you where your church is going.” He went on to further explain, “You teach incidentally through your outline. You teach irresistibly through your stories.” One of the things you want to be sure you’re sharing frequently are stories that undergird and support the values and the vision of your church.

Sometimes I would come up front during a worship service and instead of going behind the podium, I’d first go alongside it and take more casual posture. “Before we get into the message, I just want to share with you something that I experienced this week.” I’d tell a story about someone showing hospitality or going the extra mile to reach someone. Then I’d explain the reason why it struck me was that it’s such an illustration of the value we have of X or Y. I’d affirm that and ask that God show us how we can continue becoming more that kind of church.

These comments were almost like how Shakespeare used asides during a play to talk directly to the audience to share some important thought or insight. I found that the side comment was a powerful way to provide leadership through storytelling– it captures people’s imaginations. People remember your stories.

Keep in mind that this is one of the things Jesus did that was so powerful. He told stories that had a punch. Sometimes I would tell one of these stories right in the middle of the sermon– but not as part of the flow of the sermon. It was almost as if he was interrupting himself to say, “You know what I thought?” or “Here’s something I saw….” He’d pull people aside to tell them a story, then later get back on track with the sermon itself. The effect is to create a story within a story– and that’s often what people remember the most.

Pay attention to the values you want to underscore, and draw attention to what’s being done well. Doing so will help lay the groundwork for where you want to go. That’s one of the most powerful ways the vision is cast.

<< Do we need more churches? Practical help for leading change >>