Book Review: “Set It Up: Planning a Healthy Pastoral Transition” 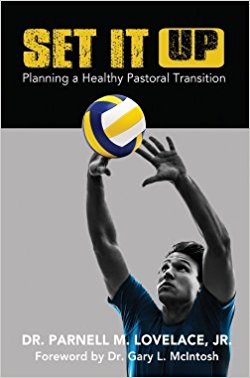 Set It Up: Planning a Healthy Pastoral Transition

In this short and practical book, Dr. Parnell M. Lovelace, Jr. looks at the critical area of pastoral leadership that is so often neglected– the passing of the baton to the next pastor. I read widely in the area of church leadership and can count on one hand the number of books I know of on this topic of pastoral succession. Most succession is done by accident, at the time it becomes an obvious need: an unexpected death or retirement or job change or moral failing. Those times are difficult enough in and of themselves without also having to begin thinking about a pastoral succession plan– and getting it done yesterday.

Dr. Lovelace makes a compelling argument for intentionality and proactive-ness. Many churches fall apart or decline at these transition points, but if you plan for your succession in advance you can mitigate much of the potential damage and even make it a redemptive and positive experience for all involved. The critical point: plan for your succession before you know you need to. And this book tells you how.

Topics covered include: determining what qualities the new pastor needs, deciding who is best positioned to select and sponsor in the new pastor, and advice for both the former pastor and the new pastor on how to handle the transition well and for the benefit of the church. Dr. Lovelace outlines the implementation of a succession plan in four distinct phases: analysis, assessment, appointment, affirmation. He even provides a sample plan and implementation process in the back of the book.

There’s a good section on five things that can derail a succession plan along with practical solutions, as well as guidance on how to adapt succession plans based on your denominational or congregational polity. Dr. Lovelace shares from his own story, but doesn’t forget that every situation is different. He also doesn’t overlook the importance of considering the impact of succession on pastoral families.

This book– filled with real life stories, biblical support, and metaphors from daily life– requires humility and trust in God to really embrace and implement. Yet it’s not just what you do during your tenure as pastor but also how you leave matters for the next generation of the church that really makes for a lasting legacy.

Succession is not an “if” but a “when.” The question is how you will handle it.

Dr. Parnell Lovelace Jr. is a regular contributor to our blog. Read more of his work here.