What do you have to say to the people? 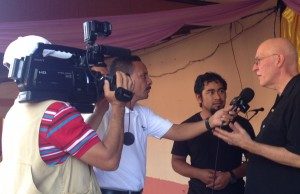 This photo is of me being interviewed by a local TV station in Olanchito, Honduras. It’s not a very large city; the station only broadcasts during certain hours each day. Someone notified the TV station that a local conference on discipleship was going on, so they sent a film crew out to interview people and do a story.

One of the people they interviewed was me. Since the conference topic was discipleship, they asked, “How does discipleship help people? What difference does it make?” They wanted to hear the practical side. I quickly and silently prayed for God’s guidance as I responded to their questions.

In response to that first question, I talked about living and loving like Jesus did and helping to meet the needs of others. Inviting people into a closer relationship with God makes their lives better and improves the lives of people around them.

Next I was asked, “Is Jesus coming back soon? “Only God knows that,” I responded. “But what about all the earthquakes and tsunamis?” “Jesus did talk about things like that happening, so we’re probably closer than we were. But only God knows when he will return.”

The final question was this: “What encouragement can you give to the people of Olanchito?” I said, “God is already actively at work in this city. So look for where God is involved and where he is doing things and seek to cooperate with what he’s doing. If you’ll do that, you’ll make the lives of the people better and you can experience God in a deeper way.”

They actually showed my interview unedited on the local TV station.

Imagine this: Someone holds a mic in front of your face and asks you these questions. What do you have to say to the people?

<< Passive, Responsive, or Proactive Actions that speak louder than words >>