I was working at a conference recently with the Reformed Leadership Initiative and they had an unusual addition to the gathering: a visual scribe. I was introduced to Keith Young, who—instead of taking notes during the meeting—recorded what was discussed via illustrations.

He had a visual agenda for us before we started the meeting: 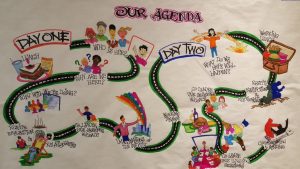 Keith even gave us visual pictures of the six networks that were going to be formed, along with their facilitators. Here’s one of them: 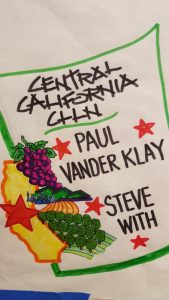 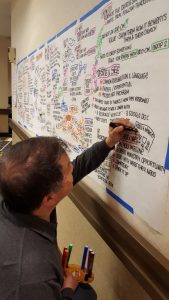 It was an amazing process to watch. He had long strips of white paper all over the walls. As the learning communities processed—working in smaller groups and then sharing their insights back to the larger group—Keith was drawing and illustrating as the meeting went on. He was just doing his thing in the background, with his wooden artist’s pallet of markers, but it brought to life what was happening.

Here’s an example of how he tracked the items we were discussing: 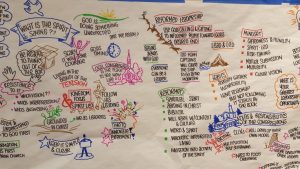 Afterwards he built a PPT document of the scribbles he had compiled in a way that fully captured the event. Check out Keith’s website, where you can see photos of some of his records as well as a video of Keith in action.

Too often we have meetings where we just verbalize… sometimes with a whiteboard. But this process took our discussion to a whole new level. But I found myself wondering why we don’t use more of the arts when we work with people? I think there are more gifts that could be used that would help facilitate our learning and training.