Slow down for potholes 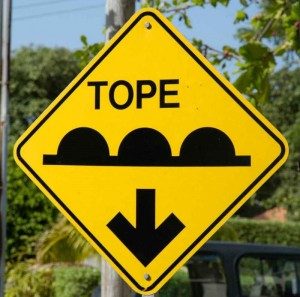 Mexico had a speeding problem. People would go way too fast. Now they’ve solved that problem by putting up “topes” everywhere that force drivers to slow down. “Topes” are gigantic speed bumps. Some are so big the bottom of the car scrapes across it and most drivers try to take them at an angle. On many roads, there are topes every 100 feet or so, not to mention potholes and junk in the road. So they say in Mexico, “Only drunk drivers drive straight.” The sober ones are trying to weave and swerve around the obstacles. My taxi driver calls the topes “montaña”—mountains. If you miss one, it will destroy your car, completely ripping up the front end.

When we go too fast, wouldn’t it be a good idea—instead of being forced to slow down—to slow down of our own free will? It’s going to be one or the other.