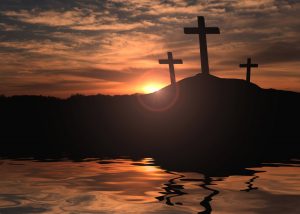 Peter did go on to serve the church faithfully. And what personal success did he have to show for it? Persecution and death. Jesus foretold this future to Peter when he sent him off on mission to feed his sheep: “’Very truly I tell you, when you were younger you dressed yourself and went where you wanted; but when you are old you will stretch out your hands, and someone else will dress you and lead you where you do not want to go.’ Jesus said this to indicate the kind of death by which Peter would glorify God. Then he said to him, ‘Follow me!’” (John 21:18-19).

Have you ever investigated what the future held for most of the first leaders of Jesus’ church? Short answer: mostly martyrdom. If this doesn’t sound attractive to us leaders now, then we can understand why Peter once rebuked Jesus after hearing that he was cross-bound. “‘Never, Lord!’ he said. ‘This shall never happen to you!’” (Matthew 16:22).

Jesus swiftly tore into Peter’s words: “Get behind me, Satan! You are a stumbling block to me; you do not have in mind the concerns of God, but merely human concerns” (Matthew 16:23). Jesus called Peter’s attitude satanic, anti christ-like, because it led in the opposite direction of God’s plan. What would Jesus call our attitudes and intentions that are “merely human concerns” for success, popularity, comfort, etc.?

In Philippians 2 Paul challenges us to foster attitudes in the model of Christ. He paints Jesus’ attitude as one of putting aside his sense of entitlement and instead “he made himself nothing.” The Greek here is κενόω. This literally means “emptied himself,” as if you poked holes in the bottom of a paper cup and let out all of the water. So even though Jesus had everything imaginable to make himself whatever he wanted, he instead emptied himself of this entitlement and became to us a servant/slave (the Greek word means both slave or servant). Paul continues to push (v. 8) that Jesus made practical decisions of self-sacrifice, as proved in his “obedience” to hang on a cross.

For most of us this obedience will not lead to a Roman cross. Yet Jesus does say to each of us: “Whoever wants to be my disciple must deny themselves and take up their cross and follow me” (Mark 8:34). The cross represents a willingness to go all the way, to go all in. Even if not upon a Roman cross, our attitude is to be obedient to the whatever, whoever, whenever, and however we can serve Jesus’ church self-sacrificially. Leaders of Jesus’ church are asked to serve with this Christ-like attitude.

A cross I once picked up was lying on the floor right in the middle of a staff meeting. 8 years ago I was serving at a church near Philadelphia to develop and lead the church’s new worship service. In the middle of my tenure at this church I was asked by my supervisor to join him and one of the leaders I was working with for a meeting in his office (I know, doesn’t sound good). As the meeting went on, the leader accused me in several negative ways. Both my supervisor and I saw this coming. This leader had some unpacked emotional baggage that had been carried over from several years back before either of the two of us were even at this church. She opened up that suitcase stuffed with emotional ire and was throwing it all, piece by piece, before me.

And then I saw it. Sitting there on the ground between the three of us, alongside all of this now unpacked baggage, there lay a cross. I could have picked up what was being thrown at me, and thrown it back in this leader’s face. I even could have self-righteously stood up, stepped over this leader’s emotional distress (and soul), and left the room on a high horse. Or I could pick up the cross. I could allow myself to hang on this cross, to remember that this leader is the sheep Jesus had asked me to feed, and to ask for the grace to pray like Jesus, “Father, forgive them, for they do not know what they are doing” (Luke 23:34). I sat there and extended only grace.

If you truly commit to leadership in Jesus’ church, you’re going to go places you don’t want to be. You’ll be carried places you don’t want to go. There will be sacrifice and hardship and the end result may not look like success in the world’s eyes. We put on the attitude of Christ with all of its obedience to the cross, often at the expense of personal ego or gain. This is hard stuff, but it is what we are called to as servant leaders of God’s church.

Towards the end of my time at that church near Philadelphia I was sitting down once again with this leader, but this time with our spouses and enjoying fellowship. The power of the Gospel will flourish as we put on the attitude of Christ.