During my time in Honduras, I found the way that handle leadership fascinating. Leaders are not appointed– they are recognized through results.

One of their titles of leadership is “extension chain teacher.” That title indicates someone who has raised up 10 churches. You do not get that title by being appointed, but by raising up 10 or more churches. The people I met there would think it makes no sense to give someone a title before they have demonstrated the proficiency. After you’ve done it– you get the title. They never put someone into a role and hope they grow into it.
I was interviewing this regional extension chain leader, Geronimo. A man in his 60s, thin as a rail because they walk everywhere. There are no vehicles in his village. To get to his house, you have to go down a ravine on a narrow footpath, then up the switchbacks to his house. Geronimo knew I would be traveling to the next village and he said, “Wait. I need to give you some rice to take to these people.” And he went running up and down like a gazelle, returning with a 30 pound bag of rice. 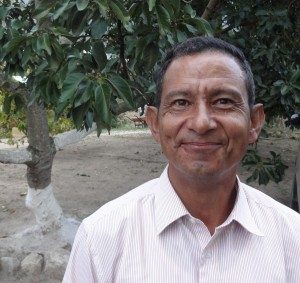 Geronimo told me about extension chains this way (pointing in one direction) and this way (pointing in another direction) and then down this road. There was also one over that mountain. There were at least 10, maybe 25 of them by now. He just keeps doing what he’s doing. He calls people together and does training with them. Goes to visit them, encourage them, and keep them going. He helps them spot problems and keep in touch with Humberto, who leads the national movement of these churches. In order to keep in touch with Humberto, he needs to hike up a hill and stand in one particular place o get cell phone reception. That’s the only place he can make a call from. Geronimo says this is a big improvement over how it used to be– when the next guy in the chain would need to physically come visit him. Now some of them have cell phones, which makes communication so much easier.

These regional extension chain leaders help people keep learning, growing, and applying their faith to life. They never stop learning themselves either.

Consider: what kind of a difference it would make if your title was just a reflection of the results of your life and what you have done?

<< How do others perceive Christians? Pastors and elders: defining our terms >>