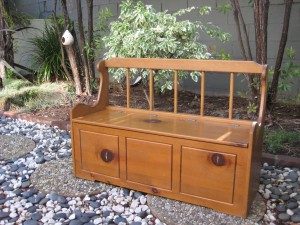 When Janet and I were engaged, she wanted a hope chest. In typical entrepreneurial fashion, I built her one from scratch without plans. Plans might take too long, so I just started with some lumber and built as I went. It turned out beautifully—a pine hope chest, one of a kind. Janet loved it and kept her things in there.

Then after we got married and were planting a church, the hope chest was repurposed into a toy chest. Everyone was having babies and so we kept toys in there for when people from the church would come over and bring their kids. Kids would go into toy chest and felt very special; each kid thought we had it there just especially for them.

The toy chest, like the hope chest, was a smashing success, but the need for each diminished over time. Recently Janet and I realized that the pine chest was just sitting in the closet not being used that well. We decided to give it away so someone else could use it. But because it was a special memory, we took a picture of it. Our picture of the hope chest turned toy chest takes up less space, but now still gets good usage.

Sometimes we have things in our lives that fulfill an important purpose. And sometimes we can repurpose them when they are no longer needed for their original use. But at some point, it becomes clutter and it’s holding you back. Often we try to hang onto these things for sentimental reasons. But if you celebrate it in some way—like taking a picture—you can keep the memory but without all the clutter. Plus you can help someone else who needs it now.

What do you have in your life that is like the hope chest? No longer useful to you, but could be used by someone else? It can be an object or an activity… anything. What do you need to do to free up more time, energy, and space to live more missionally and incarnationally?