Colin Noyes on how history can help us make disciples today

This blog entry is the third in a four-part series based on an interview with Colin Noyes, author of As You Go: Make Disciples. Colin is one of the sharpest international leaders I know. His insights into the field of discipleship are well-researched and honest, and he does a great job of challenging us to see it through fresh eyes. In this post, we discuss his book on disciple-making throughout church history, Making Disciples in a Postmodern Era. 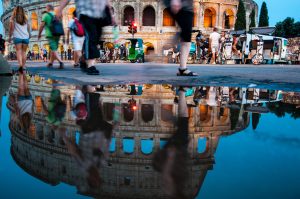 How does your approach to making disciples intersect with church history?

Colin: After a lot of research, I found that the period of history that’s most like our current time was the 2nd through the 3rd centuries, up until the time of Constantine. This was after the early and primarily Jewish church, to the gentile church undergoing persecution until it was legalized. The time was rife with paganism and there was persecution happening. People moved around a lot and made a lot of their connections in the comings and goings of their everyday lives. Most people (remember primarily gentiles now) also had no real grounding in a history of faith. The leap from where they were to where Jesus was, was vast. The process of learning and understanding often took years. We face a similar situation today.

Why is it important to look at discipleship through a historical lens?

Post-modernism doesn’t look a whole lot like modernism, but what we’ve been trying to do in the church is lay a template of modernism down over the top of a post-modern culture. It doesn’t work, and postmodern people know the difference immediately. Most of what they believe runs contrary to modernism. For instance, moderns have a fairly positive view of authority. Post–moderns do not. “Don’t trust government, churches, anything institutionalized. The final authority is the individual. What you believe is fine, but don’t expect me to believe it too.” Consider the role of the testimony in all of this. You may learn your testimony and share it, but it often has no impact. That’s because you have to start with THEIR story, not YOUR story. Because your story is perceived as having nothing to do with them. They need to start with their own story.

Given such a different starting point, it makes sense that Christianity and Jesus would take a long time for people to understand. In the 2nd and 3rd centuries, the process of conversion often lasted three years or more. People moved from one-on-one conversations to movement into the community. Slowly they dipped their toes into corporate worship, then baptism, and then communion. These rites were foundational and incredibly significant during the era, as they served as signposts marking the way of discipleship.

When sharing your faith in today's context, your story is perceived as having nothing to do with them. They need to start with their own story. - Colin Noyes Click To Tweet

Note from Bob: If you are intrigued to go deeper on how the 2nd and 3rd century approach connects with today’s context, I highly recommend you get Colin’s book Making Disciples in a Postmodern Era

Look in next week’s blog post for Part 4 of my interview with Colin Noyes.

As You Go, Makes Disciples- The aim of this book is to broaden your definition of discipleship by looking at it through a different set of lenses.  Eminently practical, As You Go, Make Disciples gives you the tools you need to move forward. Available on Kindle and as a direct download from the author.

Making Disciples in a Postmodern Era– Christianity in the 21st century is facing a major change that may be as dramatic as the Protestant Reformation. ‘The message remains the same but the method of expressing the message is constantly changing.’ This book will help readers understand that what we view as ‘givens’ are not necessarily so, and help you practice the vibrant disciplemaking of historic Christianity in today’s world.

Photo by Keegan Houser on Unsplash