If someone were to put a gun to your head… 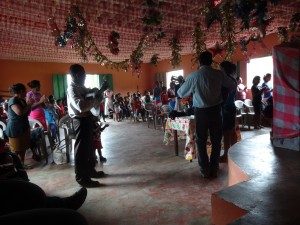 While I was in Honduras I met a guy named Oscar, who had been planting and multiplying churches for well over 30 years. He struck me as a man of amazing character, someone who will walk for seven hours to go tell people about Jesus or build relationships and not think a thing of it. When I asked him about it, he said, “We serve the king. It’s a joy and a privilege to serve the king.” This was no sacrifice to him. I was very impressed with Oscar, as well as with the other planters we met.

Later Humberto, another man who worked alongside them, told me a story. There was a gang in one of the towns—bad guys with guns. Five of them showed up at the church service one night, 3 waiting outside and two coming into the building. One gang member with a rifle pointed it at the man who was speaking and told him, “Stop. I don’t want you doing this.”

Oscar got up from the congregation, stood next to the man and said, “Don’t stop. I’ll die with you.” At that, the second gang member pointed his gun at the head of the gang member with the rifle, saying, “Don’t do this. If you shoot them, I will kill you.” The guy with the rifle backed down and all the gang members left.

But the man with the rifle was so impressed by the courage and calmness of the people and the peace that they had that he started hanging out at the church. Over the next three months, he ended up coming to know Jesus and was baptized. He gave up his guns and laid them on the altar, saying, “I have many enemies that want to kill me, but I’m giving up my guns because the peace I have from following Jesus is so worth it.”

Five months later, he was killed. But before that happened, numbers of other people came to know Christ because of the testimony of this former gang member. That’s the difference Jesus makes.

<< Gifts and calling trump personality and preference If you don’t learn, you don’t teach >>