Affirmation as the foundation of change 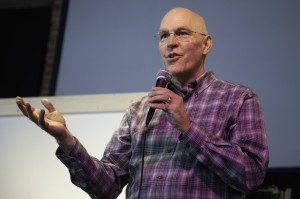 For me, seminary preaching classes were a painful experience. The worst part was when I had to go to the preaching lab to be videotaped as I struggled to deliver a message. Having to listen to myself on tape seemed bad enough, but having to see myself too was just too much.

My school had some video technicians who would occasionally find a prospective preacher’s bad habits or mannerisms and zoom the cameras in on them. When my hands imitated “spiders doing pushups on a mirror,” they filled the screen with my hands. If these guys ever decided to produce a film called What Not to do When Preaching, you can just imagine all the raw footage I gave them to work with.

As I had tried to learn how to become more comfortable preaching in front of an audience I seemed to get worse rather than better. I put more and more pressure on myself after viewing those painfully honest videotapes of my blunders. I was in a downward spiral.

One day I dragged myself into the lab and there was a new technician there. As we watched the videotapes together, Randy would make a comment from time to time: “Nice use of words there.” “Good transition.” He commented on the positives. Sometimes he had long pauses between those comments, but he only said good things.

At the end of the segment, Randy shut off the recorder and said, “Bob, let me share with you your three greatest strengths in speaking,” and he went on to list them. When he finished, Randy made one more comment that transformed my communication ability and my confidence: “You don’t get better by focusing on your weaknesses. You get better by accentuating your strengths.” If I focused on my strong points, said Randy, the weaknesses would tend to disappear over time.

This revolutionary perspective freed me to concentrate on what I did well, and my preaching skills improved dramatically. Don’t underestimate the value of helping people improve by focusing on what they do well. Positive reinforcement can work wonders as you develop your people.

<< Experiencing the change The cyclical vs. front-loading approaches >>