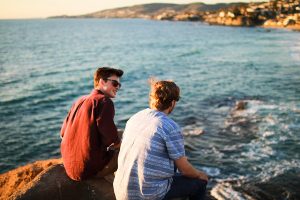 The first time I planted a church, our first public gathering was at another church building on a Sunday evening. I had one guy who was the head usher (head meaning we only had one). He was the setup guy, the logistics guy, and the greeter. Before our first service began, I walked around the building with him explaining what precisely needed to be done and why each of those tasks was important.

I said things like, “We want people to feel welcome. We need to help them be able to find where they need to go. Walk with them to show them to get them where they need to get. Make sure there are clear signs to help people get where they’re going. If you can’t meet a particular need, connect them to someone who can.” I was explaining what needed to be done and the philosophy behind it.

This man was an auditory learner. After I’d gone through it a couple of times, he could repeat back everything I had said. He got it and he did a great job.

Four facilities later (we moved around a lot), we were in a new building. I happened to overhear an usher training some new ushers. The training usher was not the man I had originally trained, but probably a third generation usher. As I walked past, I heard some of the exact same words I had used when I was training that first usher. Here’s what we do … here’s why it’s important … here are some key things to keep in mind …

So I started following them, listening in. An amazing amount of what I heard was verbatim, yet the principles were contextualized based on the new environment. They were applying the original principles to the new environment. I was blown out of the water by how accurately the training was transmitted from generation to generation. No other ministry more accurately captured the values, communicating both the tasks and the philosophy behind them, and set them into the genetic code.

<< How do you know if you’re a church planter? New seminary entrance requirements >>