The benefits of wandering 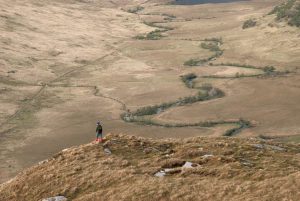 As I’ve read the Bible, one of the things I notice is that many of the people featured in its pages spend considerable amounts of time wandering around or trying to figure out what direction they should be going: Moses wandering with his people through the wilderness, David hiding out in caves as he awaits the promised kingship, Abraham hearing the call of God and setting out to follow it, Jonah hearing the call of God and running in the other direction.

I wonder if it felt like playing a game of “hotter-colder” with God. That’s the game where you have to just start moving in a direction and listening for either “hotter” or “colder” to see if you’re going in the right direction. Then– depending on geography, barriers, directions from the person in charge, and trial-and-error– you eventually figure out where you’re supposed to be.

I don’t know if that’s what it felt like for the apostles, but I certainly felt some of that when planting and leading a church. It was both a “listen for the voice of God” approach and a “figure it out as you go” approach. They worked together and I firmly believe both are valid. Sometimes our best plans were stumbled-upon, as described above, when we were forced to make certain decisions due to barriers that later presented us with unforeseen opportunities. But that’s not to say we weren’t praying and listening to God. That’s often how we recognized those opportunities– because we were paying attention.

Some leaders default to the planning side: they go through their checklist and do what they planned to do, only to find out that they were doing wasn’t what was needed. People weren’t finding it helpful. Other leaders default to spontaneity: Don’t plan at all, just stay open and something will happen. But sometimes it doesn’t. Or sometimes what happens isn’t helpful.

What about a third way? I call it “discernment and focus.” It takes the best of both of those approaches and weaves them together.  That’s the cycle I try to follow: listen for God, discern his voice, come up with a plan, focus it, start walking, evaluate where you are, see what God is doing… repeat.  As Henry Blackaby has suggested, “See where God is working and join him there.” That’s prayerful exploration to discern how God may want to use us and our ministry.

<< Coming soon to a bookshelf near you: The Leadership Difference Vision and mission: again >>