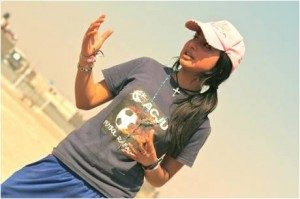 One highlight I remember from my time as a foster parent was a particular conversation– brief but meaningful. Heather (not her real name, and not pictured here) was a 14-year-old girl from the inner city and had been with us for less than a year. One evening we were having dinner and I was chatting with her about her schoolwork (which was not good).

She said, “The reason I’m failing Spanish is because I don’t like the attitude of my teacher.” It was one excuse after another. Things weren’t fair. The teacher had it in for her. And so on.

I responded in a soft voice, “You know, Heather, you’ve had a lot of hard things happen to you. I’m sure you haven’t told us everything, but what you have said is bad enough. No kid should have to deal with that. But at some point in your life, you’re going to have to stop blaming everyone else for your problems.”

She responded with a flare of anger: “I’m not blaming everyone else for all my problems!” I paused, then in a soft voice, quietly said: “Well, you just told me all of the reasons you’re failing Spanish. This happened because of that. I don’t know what you call that, but I call that blaming.” She was really angry, and shortly after that our conversation ended. It was the single longest focused conversation we’d ever managed to have– probably five minutes all together.

While I was driving her to youth group that night, Heather apologized for the first and only time… for being “such a brat.”  Perhaps this was a turning point in taking responsibility. Although we lost track of her over the years, she did graduate high school, got a job, and had a boyfriend who respected her. Teens are at such a crossroads in deciding how to shape their own values and the choices they will make… regardless of the choices other important people in their lives have made– or not made– for them.