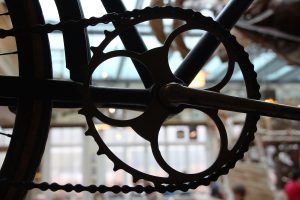 Part of a series inspired by Peter Drucker, an important mentor of mine.

“The most common cause of executive failure is inability or unwillingness to change with the demands of a new position.” – Peter Drucker

When you’re in a new position, the contribution that brought you success in your previous position is probably not the same one that will bring you success in your new position. As your ministry organization grows and develops, you need to shift gears in order to avoid stalling out. Staying in the same gear—when a different one is required for the conditions—will lead to ineffectiveness. Gear-shifting is essential for going on to the next phase.

The first time I planted a church back in the late 70s, I knew another guy who was also planting. He was an extremely gifted evangelist. He would go door to door, and it seemed like people were just waiting to ask him what they must do to be saved. His evangelistic growth was phenomenal in the early stages, and a good many new believers became a part of his church. But after a while, that growth plateaued because he limited himself to what he personally did.

I was not—and am not—similarly gifted. But when the balance shifted from what I could do to what I could equip others to do, our growth took off. Even more importantly, that growth was sustainable as more and more people became effective in relational evangelism reaching their own networks. The church grew steadily and—in the long run—had a far greater evangelistic impact.