The power of reproducible tools 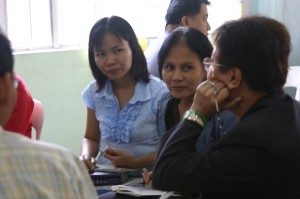 Part of a week-long series

It wasn’t until I made the training materials reproducible (so they could be easily used by another leader) that we began seeing a huge change in fruitfulness. I began to make everything I did so someone else could use it too. As I developed tools I became conscious of designing them so others could easily take them and use them too. Many, due to interest or giftedness, didn’t work out, but the portion that did increased our effectiveness exponentially.

We then decided to look into another reproducible tool: video. We wanted to make video presentations that would allow a live trainer to simply facilitate the interaction and exercises. But when we looked into it, we dismissed the idea. The cost was way too high; it was impossible. Soon after we began working with the Church of the Nazarene to create a church planting network. We developed one network and some trainers and it was fruitful. The head of church planting said to me, “Dave, our denomination really likes what’s happened in church planting and we want all of our churches nationwide to be a part of the training. We recently invested in a video-making facility, and we’d like to have the training put on video and it’s fully funded. Would you be open to that?”

It didn’t take me long to agree. We now have a full year of church planting training on video consisting of 12 full day trainings. The videos are designed for monthly use. They consist of short lecture snippets with directions given for action planning, role-playing, prayer, brainstorming, etc.

It’s so much easier for trainers to use these videos than having to do live teaching using our just our facilitator’s notes. Now all the trainer has to do is pause the video and lead the interaction. With the reproducible video tool we have now grown from 12-15 trainers to 150 trainers. Before most of our church planting networks produced churches, but didn’t produce other networks. Now we’re seeing the multiplication of networks. Reproducible tools have been revolutionary for us.