This one thing I do 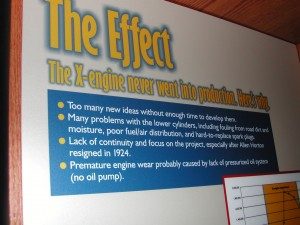 I like Henry Ford. I’ve been tweeting some quotes from him lately. When Janet and I visited Detroit, we toured Henry Ford’s house with some friends. Downstairs there was a display that Janet saw and she called out, “Hey, Bob—that’s you!”  I came over and took this picture of it. The number one reason why the x-engine never went into production:  Too many new ideas without enough time to develop them.

This thought reflects something I have been learning over the years—and am still learning:  the need to focus on the few really important things that really will make a difference. Just because someone has an idea doesn’t mean they should develop. If we spread ourselves too thin, we won’t be able to do anything.

“Not that I have already obtained all this, or have already arrived at my goal, but I press on to take hold of that for which Christ Jesus took hold of me. Brothers and sisters, I do not consider myself yet to have taken hold of it. But one thing I do: Forgetting what is behind and straining toward what is ahead, I press on toward the goal to win the prize for which God has called me heavenward in Christ Jesus.”  Phil 3:12-14, TNIV

For me, that means giving my attention to things connected to incarnational ministry. Within that realm, I will focus on developing one thing at a time, then pressing on to the next thing God has called me to. I’ve found that if I get too ambitious, I may have a great idea, but without focused energy it never gets off the ground.