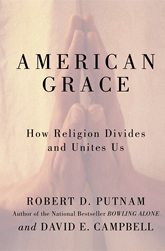 I recently ran across radio interview with Robert Putnam, author of Bowling Alone, about his new book American Grace: How Religion Divides and Unites Us. Based on the interview, it sounds as if the thesis of the book is that Americans are highly religious, religiously diverse, religiously tolerant, and religiously polarized—all at the same time. An intensive research study was conducted on religious beliefs, perspectives, and practices of Americans. In this context religion means any religion, not just Christianity. Here are a few findings I thought were particularly interesting:

o   10% of Americans say that only one religion is true.

o   7% or 8% of Americans say there is very little truth in any religion.

o   Over 80% of Americans say there is basic truth in many religions.

Definitely worth a listen—check it out.