Muscle strain in the Body of Christ 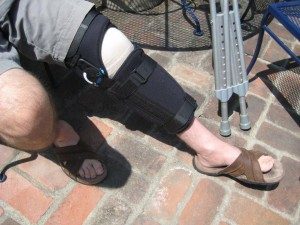 A while back I injured my quad tendon. This particularly tendon is the one that—if you’re in a sitting position—is responsible for lifting your leg up straight or kicking it out. It’s a really important function of the leg. It’s quite surprising really how many things you can’t do when that one tendon isn’t working properly. Other muscles near that tendon have been trying to compensate and they’re feeling the strain of doing something they weren’t intended to do. My whole right leg has also been put under strain by trying to carry all of my weight without its partner. It’s amazing how much—when one part of the body isn’t functioning—the other parts of the body have to compensate.

The Body of Christ operates similarly. When one part has been damaged and is in need of healing, the other parts pick up the slack for a time. The rest of us compensate to help that person get back to health. The important difference is when it’s not a matter of injury, but a refusal of one part to do its work. In the physical body, the eye never just decides, “I’m not going to see for a while. Let the hands feel around to make sure I don’t hit a wall.”  That only happens when there is a legitimate injury to the eye. But in the church, when one part simply refuses to function, it’s damaging to not only the other parts of the body but also to the overall advance of God’s kingdom.