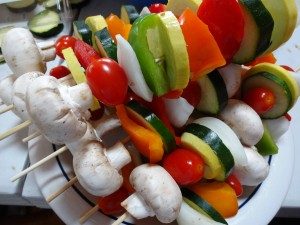 An older man I met in my local business referral group (see yesterday’s blog entry) asked me to do the memorial service when his wife died. A couple of years later, when he had heart trouble, I visited him in the hospital. I asked him about his spiritual life. He told me that when he and his wife were in their 20s and living in a different state, a fellow had shared the gospel, they had received Jesus and were baptized. But they had never been discipled, never begun attending church, and never lived in any way as a Christian. I think he wasn’t sure what that even meant — to live as a Christian.

I asked him, along with his now-girlfriend, if I could acquaint them more with the scriptures and what it means to be a follower of Jesus. We’d go through scripture passages together and I tell the people in the group to circle whatever phrases jump out at them. Then we go around and say what stood out as being important to them. One night, I said to this man, “You haven’t gone first for a while. What did you circle as important.” “Well, I pretty much circled the whole damn verse.” Because that’s the way he talks, and he meant it from the deepest part of his heart. We since have had the privilege to see his girlfriend come to know Christ as her savior. They have started attending church, asking questions, and they’ve gotten engaged.

I have absolutely loved engaging on deeper levels with the unchurched community around us. We moved to a new neighborhood 7 years ago, and it’s my mission field. I’ve had a bunch of guys over for a pool tournament. We’ve had BBQs. I was asked about being on the HOA board because there have been some contentious issues coming up. I said, “I can’t be on the board. I would lose my moderation. I’m a friend of everyone and I’d like to keep it that way.” When the time came for a difficult and potentially confrontational meeting, they came to me and asked, “Can we schedule a neutral place like your house to host this meeting?” So, for my wife and I we have a new nickname for our house, now calling it “The Geneva House,” for this is where peace treaties are made.

My wife and I just engage where we are– attending football games with neighbors, meeting at the mailbox. A lady across the street has become a believer and was baptized. She and her husband are now members of the church.

In tomorrow’s blog entry– the final one from me– I’ll tell you about how my plans for the future have been formed by my missional engagement.