Last week in my blog I wrote about the role process groups can play in local churches as a supplement to more traditional small groups. Today I want to share with you a free five-week process group I created about ten years ago called Living Life as God Intended. I was volunteering at a transitional living house for people with dealing with both addictions and mental health. Life skills seemed to be a big need—many seemed not to have learned a lot of basics while growing up—so I went about trying to create a general type of curriculum accessible to anyone and also easy to facilitate for anyone. 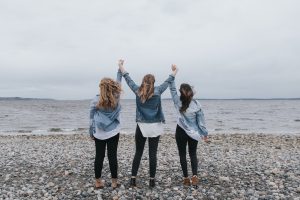 Living Life as God Intended is a five-week course to help people get back on track with life. Not just any life—but a life worth living. It draws from both scripture and the twelve steps, and each week includes some key points, a biblical passage, a discussion question, an interactive exercise, and a self-care tip for the coming week.

As we engaged with this group at the transitional living house, I recognized five factors that made Living Life as God Intended work so well–even for some residents who were incredibly troubled.

You have to be personally motivated to live your life as God intended. The residents were all required to be at a regular group meeting during this time, but Living Life as God Intended was offered as an alternative to those who were interested in the topic of how to create a life really worth living.

2. It was done in small groups.

God designed humanity with the core needs to be seen, heard, and known. So, engaging in groups small enough for everyone to have a chance to share is key. Because 15 people opted in, I introduced the topic to the full group, then we broke into smaller facilitated groups of four for personal processing.

3. Everyone had a copy of the basic outline.

Providing small group participants with the same information the facilitators have empowers people to take ownership and allows for increased participation. Click To Tweet

4. The structure was simple.

Providing some simple seed thoughts then discussion questions for processing created an environment of engagement. It’s best to not overwhelm people with too much content, because the real learning happens in the process of personal engagement.

Following up tells people that they were seen and heard, and are known. In this case, the 5-week group lead to the formation of a more extended commitment group for a number of people who wanted to go deeper and explore the ideas further.

The group was even able to help someone who didn’t seem to be able even to participate. If you want to read a super encouraging story about one of the actual people in this group and the change that took place, you can read his story here.

Sound like something you want to try? While geared toward recovery from addiction, the principles and big ideas are applicable to numerous circumstances and can be easily adapted for use in a variety of support groups. Download a FREE copy of Living Life as God Intended HERE.

Photo by Becca Tapert on Unsplash

<< Small groups or process groups? What about both? Discipleship: Passing it on >>