A journey to fruitfulness 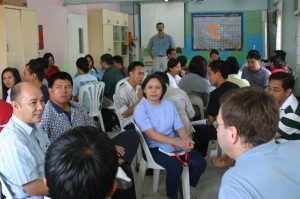 I recently asked a friend and colleague about his missionary experience in the Philippines, how he came to be there, and lessons he has learned along the way. I wanted to share his responses with you over the course of this week.

A journey to fruitfulness, by guest blogger Dave White

I was initially serving God in a difficult, if somewhat boring, church in California when God began speaking to me about missions. He seemed to be saying that I could bear more fruit in another place—somewhere further away and less familiar. I was hesitant to leave because I liked it where I was. It took me three years of resisting before I eventually moved toward missions. I’ve been serving in the Philippines ever since, and it has been thousands more time fruitful. Thousands. It’s been more fruitful in terms of people coming to Christ, new church members, new disciples, new leaders trained, new churches planted. It’s been way beyond anything I dreamed of. The first years weren’t as fruitful but I was laying foundation: learning the language and the culture, building relationships. We planted one church, then two. We did evangelism and reached people.

But when I learned about the concept of ministry multiplication and started working that way—that’s when things really took off. I took a class at Fuller Seminary, I did a week of coach training in Hong Kong (both with Bob Logan) and began putting the concepts into practice. We’ve been in occasional contact ever since.

The nationwide progress in church multiplication has been amazing:

This fruit has been the joint effort of the entire body of Christ in the Philippines. It has been our privilege and joy to have a very, very small part in all of this. I’ll write more about some of the keys to this growth tomorrow.