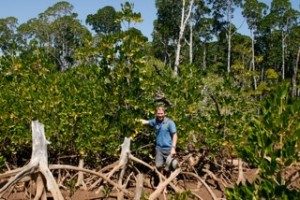 The entry below is part of a week-long series by Steve Fitch, President of Eden Reforestation Projects.

I grew up in the Philippines and loved to explore nature. In 1997 and 2001, I went back and was shocked by the destruction that had taken place.  The coral reefs had been destroyed by dynamite fishing, jungles had been largely deforested, top-soil was eroding into the ocean as a result of the deforestation, and reefs were being polluted as a result of all of these tragedies.

During this same time, I went to Ethiopia. Similar things were happening there.

Locals shared with me about how their crops were diminishing and their subsistence was changing. I was taken to the country-side, to the Udo escarpment, and I saw where a deluge had gouged the earth and had killed local villagers (their bodies were never able to be recovered). This, I learned, was common and directly related to deforestation.

I began talking to other majority-world workers in many other different places and learned that they had seen this kind of destruction and harm before. So, I began to consider what could be done. In the middle of all of these things, I was given an invitation by Halle Marian, President of the Southern People’s Region of Ethiopia:  Would we take over a defunct reforestation nursery?

Doors began to open as others turned to me for help and it became apparent that in order to best help these lives and communities, I would have to teach and promote “creation care.” Since that time, the Eden Projects has grown to minister in Ethiopia, Madagascar, and seeking to open a work in Haiti in the fall of 2011. We have planted MILLIONS of seedlings and look forward to further healing LANDS and LIVES.