Discipleship – A Challenge to Mainline Churches 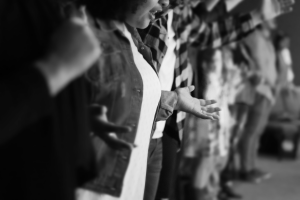 There are obstacles to raising the bar on discipleship in mainline traditions, and many of these obstacles are present in the Lutheran Church. Many of these have more to do with history and culture than they do with theology, but that doesn’t make them any less real.

Mainline churches were originally named this because of the economic success of their participants. The “mainline” referred to urban railroad lines that were used by commuters to go in and out of the city for work. Before cars were the norm, most people who had good jobs had to use mass transit in order to get from their homes to their work places. While many working class people lived and worked near their shops and factories and walked to work, the people with the high paying jobs didn’t want to live near the factories or else they worked in downtown locations. This meant that lower income people lived further off the train lines in lower cost neighborhoods. Well to do people lived in residential neighborhoods served by good rail service – the “main lines.” Churches that served these well-to-do neighborhoods then became “mainline churches.”

What this meant for discipleship, in a world that values affluence and influence, is that mainline churches were filled with more people with affluence and influence. As cultural Christianity ratified the prevailing culture, especially in the 1950s and 60s during the Cold War (“Godly America” vs. “godless communism”), Christianity became a mark of respectability. Added to affluence and influence, mainline churches began to think of themselves as “Okay.” Transformation was unnecessary. In fact, the idea that people attending these traditions weren’t already okay was often received with disdain, as if the idea that God wanted anything different was an insult.

This means discipleship for mainliners was almost equated with worldly respectability and economic success – neither of which rated high on Jesus’ list of discipleship traits! A few decades of this, and these values snuck in as assumed characteristics of people in more mainline traditions. Although not all Lutherans fit this pattern, more and more, most do have some elements of this embedded within them. And this is true for Presbyterians, Episcopalians and many other traditions with high numbers of middle-class and upper-middle-class people as their base.

So, if you want your congregation to settle for affluence, influence and respectability as marks of good Christians, discipleship will be a challenge. But as mainline traditions have shrunk, one of the key reasons why the decline has happened comes when people see church people looking so much like everyone else. They come to believe that “going to church doesn’t seem to make any difference.” The resulting, “why bother?” is the logical outcome.

Discipleship is the doorway to people who don’t continue to go to church to prove they are okay, but rather want to participate in a community of people who are growing as followers of Jesus. Theology from mainline traditions like Lutherans has the chops to deal with this, if not the practices. Finding a way to get started is the first step to generating a different culture for your church.

A downloadable Lutheran version is also available for the full set of guides.  If you want to take a peek at the free overview of the Lutheran Guides, click here.

Photo by Haley Rivera on Unsplash

<< Why we plant churches Making Disciples in the 21st Century: A new resource from Australia >>