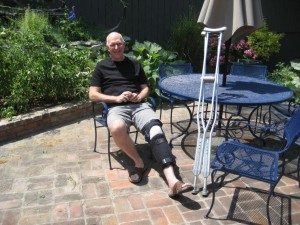 On the last evening of my trip to Mexico City over two months ago, I fell down some stairs. I turned my ankle, twisted my knee and banged it. My host called a doctor, whose best medical advice was that I should get back to the U.S. and have it treated there. After several days of hobbling around, I realized that my leg was apparently not going to heal up on its own, so I went in to the doctor to have it looked at. Apparently, I had torn the quad tendon, which required surgery to repair. Now, 6-8 weeks after the surgery, I’ve started the formal rehab process. Rehab will take some time, but the prospects for full recovery are quite good.

This has been a humbling process for me. I’m humbled by the blessing of living in this time, where we have the technology of repairing my leg. In any previous era, I’d be lame for the rest of my life. I’m grateful to be living in the U.S. in Los Angeles, where I live within an easy distance of some of the top orthopedic surgeons in the world. I’m also humbled to have the financial resources and health care to get this work done. The vast majority of the billions of people on this planet, had this happened to them, would not have had the access to services to get the necessary surgery. It’s a humbling experience to be that blessed—through time, place, and resources.

And for those of you who are basketball fans, here’s a fun piece of trivia:  the doctor who did my surgery is the team doctor for the LA Lakers. I asked him if I would be able to dunk after the procedure. He didn’t answer, but just laughed… which I’m choosing to interpret as an affirmative.

<< Reflections on the complexities of our changing world The tea or the cell phone? Prioritization by necessity >>