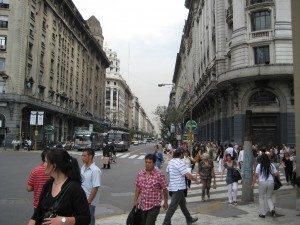 When we look at the way the Apostle Paul discipled others, we see him capitalizing on what people are already doing. He shows up where they are: in the temple courts, where the philosophers are debating, in the ports where people are coming and going, where the work is being done.

Sometimes the Apostle Paul was a “professional” missionary receiving support and other times he lived bivocationally as a tent-maker. What opportunities did that bivocational status afford him? Through his tent-making trade he met Priscilla and Aquila, who he discipled and who later joined him in ministry:

Then Paul left Athens and went to Corinth. There he became acquainted with a Jew named Aquila, born in Pontus, who had recently arrived from Italy with his wife, Priscilla. They had left Italy when Claudius Caesar deported all Jews from Rome. Paul lived and worked with them, for they were tentmakers just as he was. Acts 18:1-3

As you’re sewing, you can talk. If you are discipling starting with non-Christians, you go to them and engage with them in their world. Capitalize on what people are already doing and where they are already gathering.