Returning to a laboratory of church multiplication 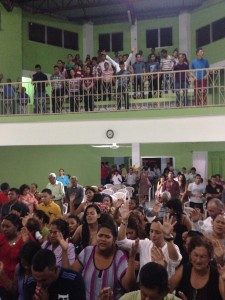 I originally went to Honduras over 30 years ago, because I wanted to learn about church planting. The question I had was, “How do you start churches that start churches that start churches?” I knew our church was supposed to be involved not just one or two other churches, but lots of other churches. So I thought, “Where in the world can we go to learn about how to do this well?” Someone suggested Honduras. When I went down there 30 years ago is when I first met Humberto Del Arca, one of the leaders of their church planting movement. He was sitting in a hammock in a small town in a remote area, playing his guitar and singing worship songs to himself.

Much of what I’ve learned, I’ve learned from Humberto and his ministry. It was a great joy to be invited back this year. Even after 30 years, they’re still focused, still living out church multiplication. They haven’t lost their focus on making disciples, and they’re continuing to reach out to the next village, the next town, raising up the next church leaders from among the converts.

I asked Humberto some specifics about how the church has grown. He told me that 30 years ago, evangelical Christians were 8% of the population. Now they’re 20% of population. He believes that one of the main contributing factors is that they’ve faithfully maintained their focus through the years on making disciples.