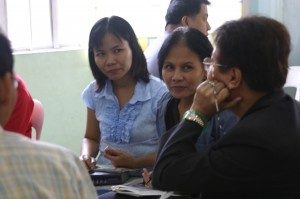 This week’s blog series is by Dave White, a missionary with OC International in The Philippines. He shares his experience using T4T. T4T (Training for Trainers) is a set of principles that weaves together evangelism, evangelism training, discipleship, and leadership development, including development of new pastors for new churches. This is all done in the context of actual church planting and church multiplication.

Ying Kai was a traditional church planter. Living in a city of millions, he was planting churches one at a time, one church per year, with about 50 people each. After 20 years, he realized that at this rate, he was never going to reach his city. He realized he needed to do things much differently, so that churches would reproduce more rapidly. He went to one church of 30 people with the goal of mobilizing each of those 30 people to plant a new church. Most did! And then he mobilized these new believers to also plant churches themselves. In this way, 100,000 house churches were planted over the next ten years, with 1.7 million baptisms. Amazing! Independent checkers came to see if the count was accurate and found the estimate to be conservative.

As a church planter, I read that story and thought, “I’ve got to try this.” When I did, I didn’t have results like Ying Kai. However, I did have results about six times better than my previous church planting record. T4T is all about reproducibility. I had learned about the value of reproducible tools from Bob Logan many years ago. But I came to realize that the degree of reproducibility of my tools fell far short of that of Ying Kai’s. T4T lessons are designed to be so straightforward and easy to use that brand new believers can easily teach them, then immediately hand them off to their new believers who can also teach them.

To get started here in the Philippines, I first took a look at what others were doing elsewhere. I discovered there were three main types of Outreach Bible Studies that cpm (church planting movement) practitioners were using: fill in the blank, three column writing, and stories. Fill in the blank lessons were simply worksheets: read the verses then fill in the blanks. Three column writing meant copying a passage of scripture into the first column, rewriting it in your own words in the second column, then writing how God would want you to obey the passage in the third column. Stories were simply using Bible stories as a basis for evangelistic teaching and later for discipleship.

I found that the fill in the blank style worked fine for me, and other qualified leaders. But new believers couldn’t explain the answers in the blanks. I couldn’t get it to reproduce. The three column writing didn’t work well at all for me. The attenders always came up with the same applications no matter what passage I used. I had the most success with stories. I’ll write tomorrow about how I adapted the story method for my ministry context.

<< In and through: how transformation connects to mission T4T: The power of Bible stories >>