Does Easter happen outside of the church? 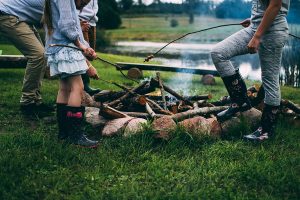 Today’s entry is by guest blogger Randy Lovejoy. His new website– www.EnactedPrayers.com— will be going live in August.

“He is risen!” said Steve to another man who had just gotten out of one of the teepees which surrounded the common area. “Right” the man responded, somewhat confused and still asleep. It was Easter morning and so the greeting was certainly appropriate. But this was a group of families who do not go to church. They don’t know what to do with such a phrase; even if it is Holy Week.

Cheryl, the boys are I were experiencing our first Easter without Church. We certainly missed all of the special services leading up to Easter as well as the wonderful celebration that Easter day brings. But we felt sure that God was calling us to accept an invitation from a number of families from Sam’s school to join them on a campout about an hour outside of Los Angeles instead.

I had woken up early that morning. Steve, a comedian who has described himself as “a lapsed Catholic” saw me and, knowing that I am a Christian and a pastor, came up to me and said, “Happy Easter, Randy!” “No, no, Steve,” I replied. “It isn’t ‘Happy Easter’, it is ‘He is risen!’ and then I reply ‘He is risen, indeed!'” Given our joke filled, playful relationship, Steve was ready to act it out. “He is risen!” I said to him again. “He is risen, indeed!” Steve said.

But the really wonderful, and entirely unexpected thing, was that Steven then began greeting all of the other families with “He is risen!” as soon as they came out of their teepees. None of them had any idea how to respond. But they learned quickly. By the time Cheryl came out of the teepee another mother in the group walked up to her and said, “He is risen!” Cheryl responded, “He is risen, indeed!” “Dang!” the woman said in disappointment. “You already know it.”

Thus moves the Kingdom of God.

We have been invited to go camping again with them again next year. Another family, who is Christian, is planning on coming as well. We hope to put on an Easter service for our families and invite the others to join us. It will be fun to see what God does next.