Natural Church Development (NCD) has principle of energy transformation: the energy of one part of a system is harnessed and used for the benefit of the whole system. For example, when there is conflict or tension, you can take that energy and– instead of running away from it– you can use even negative energy to propel you toward a mission. When there is dissatisfaction, channel that energy towards the will to change.

Acts 8 provides a classic example of energy transformation. Stephen was stoned and the church entered a season of intense persecution and scattering. Yet from that negative energy, what happened? The gospel was spread into Samaria and even Ethiopia. The result of scattering was wider-reaching evangelism.

Scott Gunn, an Episcopal Priest, writes on his blog about an Acts 8 moment:

“Precisely in the need to move outside Jerusalem, the church found its opportunity to engage the world. In thinking beyond the familiar world of Judaism, the church was able to offer the Good News to Gentiles. A small vision was crushed in order to make possible a broad, world-changing vision….

“The simple fact is that while it is true that the church has survived all manner of misfortune in its history, it is also true that the church as we know it will not survive much longer. In Christian history, the last couple of hundred years in general, and the last few decades in particular, are anomalous. The world has become post-Christian, and we’re still carrying on as if we live in Christendom. We try to cling to vast institutions worthy of the Roman Empire. Our church will soon begin to look much more like it did in 250 than in 1950.”

We can take negative energy and conflict– even internal conflict– and use it to spur us on toward a broader vision. Sometimes there are good things that can come out of negative circumstances we face if we channel that energy in productive directions.

Painting of the Stoning of Stephen, below, by Rembrandt. 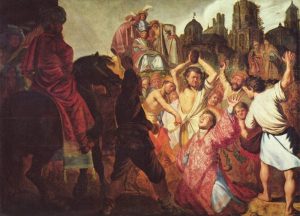